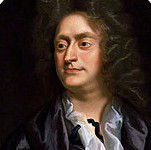 Variations on a Purcell Air
for Flute, Oboe, Clarinet, Piano and String Quartet

Based on a simple air in G major by English composer Henry Purcell (1658-1717), this short work unfolds in five sections after a brief prologue. The first section is a straightforward presentation of the tune, while the second shifts the tune across various instruments against a stately succession of chords on the piano. In contrast, the third section employs irregularly-timed piano chords against the tune, which is played by viola and cello, while phrases of the air are echoed in two canonic reflections by the winds, each repetition a third higher than the last, and at three beat intervals. The fourth section, at a slightly faster tempo, presents the tune in violin and viola in octaves, with a jazzy accompaniment from the other instruments. In the final section, the tune appears in the violins and the piano, along with some of the winds, while the other instruments play ascending and descending diatonic sequences against them. Throughout the work, the motif of successively higher sequences of descending diatonic thirds is used repeatedly, and is made explicit in the coda of the finale. 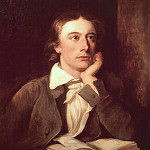 Ode to a Nightingale
for Oboe, Countertenor, and String Quartet
Text by John Keats (1795-1821)

One of the composer’s favorite works of poetry has been set to music that reflects the wide-ranging moods of the poem. Steeped in nostalgia and melancholic reflection, the poem contains striking imagery and some of the most evocative poetic phrases ever coined. The countertenor soloist must convey the poet’s swirling emotions that range from delight to despair. The oboe part is almost but not quite an obbligato part; although it does not attempt to imitate the nightingale directly, its birdlike quality is suggestive of the poem’s subject, the poet’s inspiration for deep reflection on the fleeting nature of our human existence. This is the first performance of this version with string quartet accompaniment; a previous version for mezzo-soprano, oboe, and piano was premiered by Taylor Boykins in Baltimore in 2018. 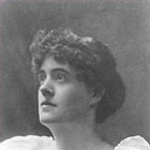 You Give Me Back My Christmasses
for Mezzo-Soprano, Clarinet, Violin, Viola, and Cello
Text by Rosamund Marriott Watson (1860-1911)

This song sets text taken from “The Christmas-Tree”, a poem that takes a nostalgic look at childhood Christmas memories inspired by the wonder in a child’s eyes. Originally written for mezzo-soprano, viola, and piano, this new version employs an accompaniment of clarinet, violin, viola, and cello. The music is adapted from music written for one of the scenes in the composer’s opera For Those in Peril. 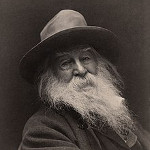 On the Beach at Night
for Mezzo-Soprano, Baritone, Flute, and String Quartet
Text by Walt Whitman (1819-1892)

Walt Whitman’s reflective poem also centers on a child’s sense of wonder, this time in response to the night sky. At times alternating and at times in harmony, the singers narrate the story and try to comfort the child who fears that the clouds will cover the stars forever. The text has been set with only a few minor adjustments to assist the listener, including a final reiteration of Whitman’s central message that there is something “more immortal even than the stars.”

Considered the finest poetic ballad in the English language, this poem has inspired numerous works of art, including the composer’s own choral and art song settings. This evocative fantasy of a knight who falls victim to a faery enchantress is a powerfully poignant tale that resonates with anyone who has loved and lost. Based on a simple folk-tune-like melody, the music alternates between major and minor modes to fit the changing atmospheres of the poem, with the soprano portraying the enchantress and the baritone her unwitting victim. 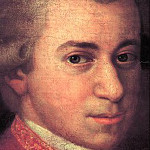 This work was written with the briefest of nods to Mozart’s Eine Kleine Nachtmusik and is an exploratory musical essay on breaking the eight eighth note pulses within 4/4 into various groups, one of which is almost always a set of 3. Rambling through a series of only slightly related keys, the piece begins and ends on a unison D. 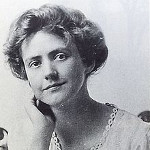 A work in progress, this one-act comic opera is based on a 1914 comic play which takes a satirical look at the fad for Freudian psychoanalysis in the early twentieth century. The play opens with Henrietta Brewster regarding her architect husband Stephen with a critical eye and suggesting that he is suffering from some sort of a subconscious complex. He views her suggestion and all psychoanalysis as nonsense and states as much with firm conviction. The opening dialogue, taken from the play, leads to an interpolated duet, with text by the composer, that features Henrietta’s enthusiasm for psychoanalysis alternating with Stephen’s derision. 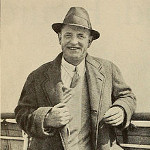 The Family Curse
Scored for Flute, Oboe, Clarinet, and String Quartet
Book and Lyrics by the composer, based on P.G. Wodehouse (1881-1975)

This work in progress is to be a one-act operetta based on the first Jeeves and Wooster story by P.G. Wodehouse, Extricating Young Gussie. It opens in the sitting-room of Bertie Wooster’s apartment in London, where Bertie sings (No. 1: Solo: “She sprang it on me before breakfast!”) about his Aunt Agatha, who has come to request that he go to New York in an attempt to dissuade his cousin Gussie from marrying the vaudeville actress he has fallen for. Realizing there is no way out, he and Jeeves agree to go to America. In the bar of a New York hotel after his arrival, a discouraged Bertie relates to the barmaid the story of his failure to find Gussie at the hotel, where he was supposed to be staying. After tossing down a couple of the barmaid’s special drinks, Bertie suddenly feels better, and he and the barmaid sing about the magic feeling that seems to come over everyone in the city (No. 3: Duet: “New York magic!”). The title of the operetta derives from a line in the story, when Bertie Wooster speculates that his cousin Gussie, who is the son of a former vaudeville performer (Bertie’s Aunt Julia) and wants to marry a vaudeville performer, might be the victim of a family curse: “Perhaps the thing is going to be a regular family tradition, like you read about in books — a sort of Curse of the Mannering-Phippses, as it were. Perhaps each head of the family’s going to marry into vaudeville for ever and ever.” Aunt Agatha is horrified at the thought. 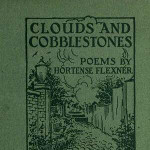 After several attempts dating back to 2015, the composer finally completed in 2020 this  setting of the text of Voices, a short one-act play written in 1916 by American poet and playwright Hortense Flexner (1885-1973). Yvonne, a peasant girl, comes to the ruined church in the village of Domrémy during the First World War to pray to Jeanne D’Arc (Joan of Arc). An unnamed girl, dressed like herself, and simply called “The Other” in the stage directions, emerges from the church. They engage in an at times heated discussion of how Jeanne D’Arc might have ended the war.

Born in Louisville, Kentucky, Hortense Flexner studied at Bryn Mawr College and the University of Michigan, where she obtained the M.A. degree in 1910. Returning to Kentucky, she worked as a journalist, for several years editing the women’s page for the Louisville Herald, where she met her future husband, Wyncie King. Her first collection of poetry, Clouds and Cobblestones, was published in 1920. She was active in the suffrage movement and many of her poetical and dramatic works reflect her commitment to women’s rights. Written in blank verse, Voices serves as a fine text for an opera scene; the composer has set the entire text with only a very few minor edits and virtually no repetition. The play’s powerful imagery and impassioned expression of women’s hopes for an end to war still resonate more than a century later.