The Ballad of Grace Darling

’Twas at the Longstone Lighthouse,
There dwelt an English maid,
Pure as the air around her,
Of danger ne’er afraid,
One morning just at daybreak,
A storm-tossed crew she spied,
And though to try seemed madness,
“I’ll save the crew,” she cried.

They bravely rode the billows,
And reached the rock at length.
And saved those storm-tossed sailors,
In heaven alone their strength.
Go tell the wide world over
What British pluck can do,
And sing of brave Grace Darling
Who nobly saved that crew. 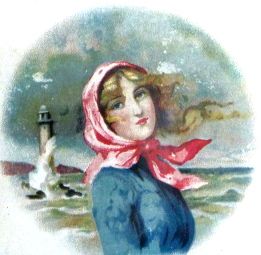 Off the Northumberland coast of England in 1841, a paddlesteamer ran aground on the Farne Islands. The daughter of the lighthouse keeper at the Longstone Lighthouse, Grace Darling, insisted that she and her father row a boat out to rescue nine of the crew members, despite raging seas. She quickly became a folk heroine, and the anonymous ballad shown at left appeared soon after the event. In For Those in Peril, composer Francis Lynch has set these words to a new melody and crafted a duet that becomes another incident in the history of the bad blood between Howell and Griffith. 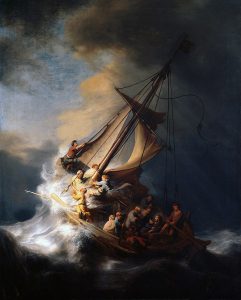 William Whiting (1825-1878),  an Anglican churchman from Winchester, England, wrote this hymn in 1860 after a violent storm nearly wrecked the ship he was travelling on. Versions of it were adopted by many branches of the armed forces of Britain and the USA, and it has become known as the “Naval Hymn.” The best-known tune for the hymn was written by English composer J.B. Dykes in 1861, but in the opera it is set to new music by Francis Lynch, who considers it a masterpiece of hymn writing in its clever rhymes and Biblical references.

Eternal Father, strong to save,
Whose arm hath bound the restless wave,
Who bidd’st the mighty ocean deep
Its own appointed limits keep;
Oh, hear us when we cry to Thee,
For those in peril on the sea!

O Christ! Whose voice the waters heard
And hushed their raging at Thy word,
Who walkedst on the foaming deep
And calm amidst its rage didst sleep;
Oh, hear us when we cry to Thee,
For those in peril on the sea!

Most Holy Spirit! Who didst brood
Upon the chaos dark and rude,
And bid its angry tumult cease,
And give, for wild confusion, peace;
Oh, hear us when we cry to Thee,
For those in peril on the sea!

O Trinity of love and power!
Our brethren’s shield in danger’s hour;
From rock and tempest, fire and foe,
Protect them wheresoe’er they go;
Oh, hear us when we cry to Thee,
For those in peril on the sea!

(Top left: The Storm on the Sea of Galilee by Rembrandt van Rijn)

What goes into an opera?

For Those in Peril is mostly made of pieces the composer and the librettists invented, but it also includes a famous hymn text; two prayers from the Book of Common Prayer; a folk song text; a traditional sea shanty; an art song (both words and music); and words from a variety of 19th century poets.

In our next set of blog posts, we’ll look more closely at these added ingredients and fill you in on the background of their creators. 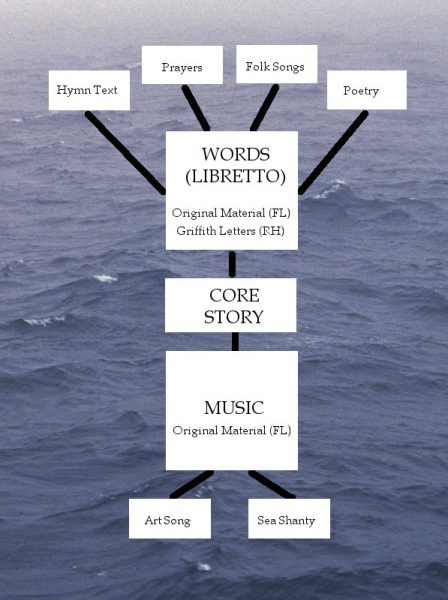 Spoiler Alert! Well, not really, you see. After all, it’s an opera. The synopsis is part of the program. There are really no surprises in an opera, except in the details of the production. So here is the history of the incident in the winter of 1800-1801 that inspired the opera, as related in Ivor Emlyn’s history of the old Smalls lighthouse, published in 1858. (Recall that Henry Whiteside was the lighthouse architect.)

From its establishment until that time, two Light-keepers only inhabited the place together; and the two on duty at the period were Thomas Howell, of Kingheriot, and Thomas Griffith, of Solva. The former was a Cooper by trade… For four months it was found impossible to land on the rock… A storm had set in, and in the course of a week or two, a signal of distress appeared hoisted at the lighthouse. At that time there was no code of signals… The many vessels that passed the place, reported at the ports they got to, that a signal of distress was out on the Smalls – but what that distress could be, none of them could tell…

The anxiety of Mr Whiteside, and the relatives of Howell and Griffith, all this time was intense. Night after night saw some of them on the cliffs, watching the lights – fearful of something having befallen the both. The non-appearance of a light would have been direct proof that such was the case; but as regularly as they watched, the light burned with its usual brightness…

The cause of distress was that one of the keepers had died, apparently due to some mysterious illness. Emlyn continues:

...poor Griffith breathed his last; then perhaps, commenced the worst chapter in the surviving Light-keeper’s experience of that sad time. Decomposition would quickly follow; and the “body of death” would vitiate the atmosphere of the too confined apartment. The body could not be thrown, to find its grave, into the sea; suspicion with her thousand tongues would point at Howell as the author of foul play – that to hide a lesser fault he had committed the greater one of murder!

Howell’s skill as a cooper, enabled him to make a coffin for his dead companion, out of boards obtained from a bulk-head in the dwelling apartment. After a great deal of labour the body was carried to the platform and firmly secured to the railing. For three weeks – weeks apparently as long as months – it occupied this position, before the weather moderated. A Milford boat at last landed two Light-keepers, and brought away Howell and the body of his companion… Howell’s attenuated form demonstrated the sufferings, both mental and physical, he had undergone; his friends, in some instances, failed to recognize him on his return home. Four months in such a place, and under such circumstances, what would it not effect? Mr Whiteside from this calamity, wisely determined that three Light-keepers should inhabit the structure at the same time; and three continue to be the number employed hitherto.

Now you know the incident that inspired the story that inspired the opera. The story is called The First and Last Letter from Thomas Griffith to his Wife and was written by For Those in Peril co-librettist Raymond Humphreys. [Note: the roles of Griffith and Howell are reversed in this story — and in the libretto — from those in Emlyn’s history.]

Lighthouses in the British Isles in the first part of the 19th century were privately funded and could be very profitable. The right to collect dues from vessels was by warrant from a local authority or the crown. Foreign ships would often avoid seeking refuge on the south coast of England for fear of being forced to pay costly lighthouse fees.  John Phillips, a Welshman residing in Liverpool who formed the company to build the Smalls light, probably obtained his warrant from the port of Liverpool, which must be reached from continental Europe by going around the western part of Wales, where an encounter with the Smalls might well take place.

Henry Whiteside’s previous woodworking experience was in making violins and harpsichords, but it was his design for the Smalls lighthouse that was selected for construction. And it was he who led the expedition along with six Cornish miners, whose job was to pierce the rock for the insertion of the oak pillars, to begin construction in the summer of 1772.

Construction of the lighthouse was an arduous and dangerous process, especially for a man like Whiteside with little nautical experience. When he visited the lighthouse in 1777 to make some repairs, he was stranded for a month by storms, a story that he relates in Scene 12 of the opera.

Next: the incident upon which the opera is based! Stay tuned… 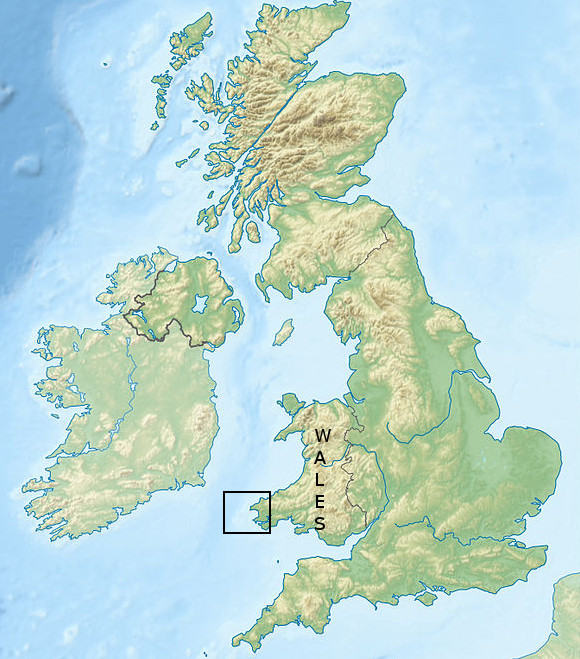 The events of For Those in Peril take place in the westernmost portion of Wales, part of the United Kingdom on the island of Great Britain. Much of the action takes place at a lighthouse on the largest of a group of wave-washed rocks known as The Smalls, about 20 miles off the coast. The map below is an expansion of the highlighted area in the map above. 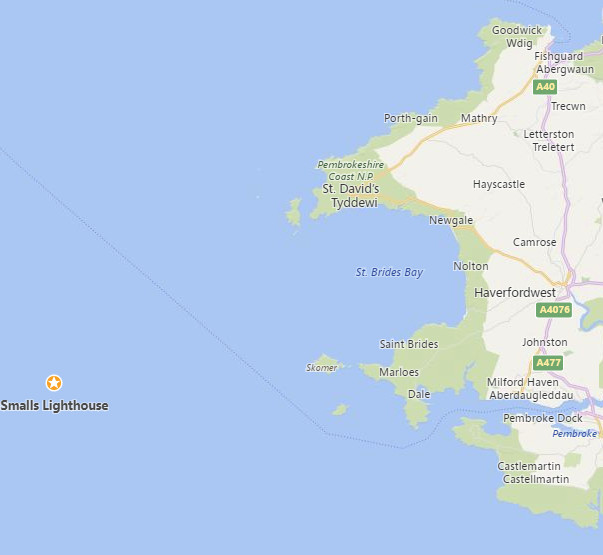 The action on shore takes place in an unspecified village in Mathry Parish, part of the county of Pembrokeshire. The village of Mathry can be seen toward the upper right of the map above. 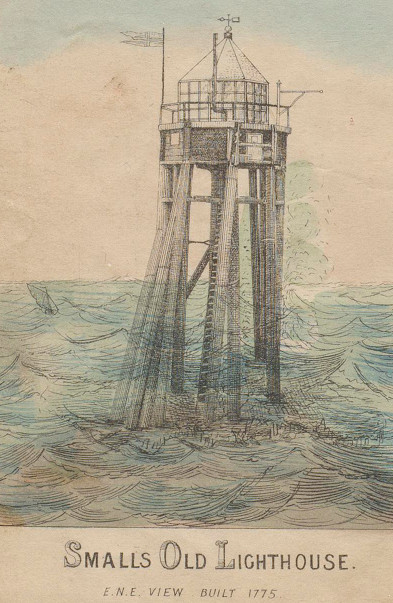 The lighthouse in the opera was the first to be erected on The Smalls, in 1775, by a Liverpool instrument maker named Henry Whiteside, who appears as a character in the opera. His design, using nine oak pillars to support the lighthouse, allowed waves to pass through below the structure. The illustration above is from an 1859 book describing the history of the original lighthouse, which was replaced in 1861 by a more conventional stone tower.

We’ll have more background on the opera in future posts!

Here you will learn about the background of the opera: how it came to be written; the events on which the opera is based; the characters in the opera; and the diverse elements incorporated into the work.

We’ll also give you a behind-the-scenes view of rehearsals and the development of the production, as well as interviews with the creative team.

Ready? Join us for this adventure!